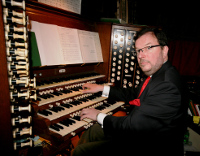 John rejoined us as Organist in 2015 after a gap of some 20 years, during which he was based in other parts of the country and played for a number of churches. The most recent of these was St Wulfram's Grantham.

He now plays for our main services.

He is available as a freelance organist at other times. You can read more about this on his website.

We currently have a vacancy for an Organ Scholar. Full information in our Scholarships webpage.

Mark joined us in January 2018. He graduated with a First Class Degree in Music from Kings College London in 2017. He has Grade 8's in Piano (Merit), Saxophone (Merit), and Singing (Distinction) and studied the Organ with Martin Penny. Hobbies include playing piano, harpsichord, and saxophone, choral singing, politics and current affairs, gym, menswear, reading, cycling, qualified dinghy sailor, whisky collector, and a black belt in Karate. He left us in the Autumn of 2018 to take and M Mus at New College , Oxford.

Michael was the first holder of our 'Soundbites' Organ Scholarship (founded 2012) and is currently William and Irene Miller Organ Scholar at St Paul's Cathedral.

He left us in Summer 2017 having been elected Organ Scholar of Selwyn College, Cambridge commencing Autumn 2018. During his time there he passed both ARCO and FRCO winning major prizes and awards from both the RCO (Limpus Prize and Silver Medal of the Worshpful Company of Musician) and the University (starred First in Music) and then spent a year as Post-Graduate organ Schola at Guildford Cathedral.

He spent his 'gap-year' between school and University as Organ Scholar to the Dean Close Foundation. There he worked with musicians throughout the school, the Tewkesbury Abbey Schola Cantorum of Dean Close Preparatory School and the choristers of Tewkesbury Abbey.

Brian Bromley has been associated with All Saints' for over 60 years, originally joining the choir as a probationer at the age of 7. He is a busy teacher of Piano, Voice, Organ, Maths and English as well as a popular recitalist.

He trained with W.J. Comley, who served the church as organist for 50 years, and then with Harry Gabb (St Paul's Cathedral) and Martindale Sidwell (Trinity College). Having gained his Associateship of the Royal College of Organists, Brian succeeded Comley as Organist of All Saints' in 1966.

By then he had served as organist of several churches, including St Gabriel's Cricklewood, where he played the post-war neo-classical Walker organ. He was fortunate to also gain many insights into baroque performance practice from Joseph Henriksen. These influences came to fruition in an imaginative and sympathetic restoration and enhancement of the organ of All Saints in 1971.

As Director of Music, Brian strove to achieve a balance between the authentic performance of early music, much of which he introduced to the choir, and the enjoyment of music. He resigned in 1975, feeling that after ten years further improvement would only come from an injection of fresh ideas. He served a further term from 1978-1981. He has remained an active member of the choir and frequently gives recitals here and elsewhere.

Brian stepped down from singing and playing regularly in December 2009 and was awarded the title Organist Emeritus to mark his 60 years of service to All Saints.