No-one knows when the first church of All Saints' was built. In 673 A.D., the first Synod of all the Bishops in England was held at Hertford suggesting there was at least one church here then. We do know that All Saints' is one of two churches mentioned in the Domesday book. This building must have been replaced at least once by the end of the medieval period, for photographs of the building destroyed in the fire of 1891 show a fifteenth century church in late Perpendicular style. It was built in the typical Hertfordshire materials of stone and flint clyst overlaid with roughcast.

One of the other medieval churches was that of St John. It was pulled down in the late seventeenth century and the parish was amalgamated with All Saints'. Our hall is known as St John's Hall to remind us of this.

At 5:00 am on Monday 22nd December 1891 a baker on his way to work saw flames coming from the roof on the north side. Due to the bitterly cold weather the fire brigade's pumps froze and so by 8.00 am the church was completely destroyed, the spire having collapsed and the interior being completely gutted. The only survivals were the parish chest (the scorched All Saints' registers are now in the Hertford County Record Office), and parts of two brass memorials from the fifteenth century.

A competition was held for the design of an entirely new church of All Saints'. The winners were Paley, Austin and Paley of Lancaster. E.G Paley, the head of the firm, had attended Christ's Hospital, then in Hertford. The church is typical of those designed by H.J. Austen and is built of Runcorn stone, as is Liverpool Cathedral. The first stage alone required 2,000 tons to be brought by rail.

The foundation stone was laid on March 25th 1893 and the new All Saints' church was consecrated by the Bishop of St. Albans on February 20th 1895, a very short space of time to erect such a large building. The insurance for the old building contributed ₤2,800 and a further £12,500 was collected by public subscription.

The style is Victorian perpendicular and All Saints' is the largest church in Hertfordshire, apart from St Albans Abbey, seating up to 1,000 people. The exterior of the chancel walls have latin texts carved in them. On the north side verse 20 from Psalm 103: Praise the Lord all you His angels, you that excel in strength: you that fulfil His word and obey the voice of His commandment. On the south side there is a verse from the Te Deum: To Thee cherubim and seraphim continually do cry, Holy, Holy, Holy.

The tower was completed ten years later at a further cost of £12,000. It was opened by the Bishop of St. Albans on All Saints Eve, 1905 as a thanksgiving for the life of Queen Victoria and is named the Victoria Tower. It rises 140 feet from the ground. A peal of 10 bells was installed in 1907. More information on them and our ringers can be found here.

There is a similar building in the North West of the country - St Silas, Blackburn. Designed in the late 1870's, construction started in 1895 - ie two years after All Saints. Both have a five bay Nave, an angled South Porch, a castellated Tower (albeit with the staircase on opposite sides of the West Front) and many more similarities of design. In some further parallels, the towers and stained glass are later additions. The Reredos added at St. Silas in 1915 is clearly from the same design/build 'stable' as that installed in All Saints in 1913. We would be interested to know more - not least as the All Saints' footprint, with several strange angles, isn't the most obvious way to use a simple, flat (ish) site. 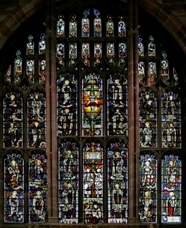 The dominant feature of All Saints' is the great East Window. It is by C.E. Kempe and his wheatsheaf mark can be seen in the lower left corner.

The theme of the window is the verse I am the true vine, you are the branches (John 15, v5). In the central pane is the true vine with the crucified Christ reigning in majesty upon it. The branches of the vine, spreading out from the cross, contain Christian saints. At the foot of the vine is St John the Evangelist with his gospel and an eagle. In the surrounding panels are many more, including St Mark, St John the Baptist (in camel skin), St Peter (with keys), St Alban (with palm), St Cecilia (with organ), St George (in armour), St Matthew and King Ethelbert. More information, and access to a much larger version can be obtained by clicking on the picture. 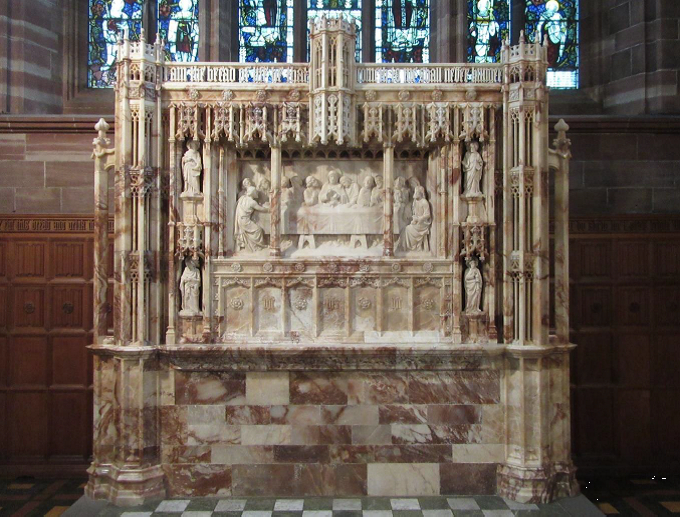 The beautiful alabaster Reredos depicting the last supper was presented in 1913.

The organ was installed in 1899 and is one of the last built by "Father" Willis. Alongside it are memorial plaques to previous organists including Charles Bridgeman, organist of All Saints' from 1792 to 1873, until recently the world record at 78 years in office.

The Memorial Chapel was finally completed in 1934 and is a memorial to those from All Saints' parish who died in the First World War. The east window, by J.N.C.Bewsey, depicts the four martyrs, Stephen, Peter, Paul and Matthew. The north side has windows by Shrigley and Hunt depicting Elizabeth and John the Baptist, Eunice and Timothy and the Annunciation. Full information on the memorial, and that for the Second World War, be found here.

There are two further windows in the south aisle the first depicts people who figure in the birth and life of John the Baptist and the second the Presentation of Christ in the temple.

The Regimental Colours of the 1st Batallion the Hertfordshire Regiment hang in the chancel. They were laid up on May 16th 1954 and July 1st 1967, on both occasions in the presence of H.M. Queen Elizabeth the Queen Mother.

The glass doors at the west end were installed in 2003. The etching, designed by Michael Coles, is based on the vision of the Heavenly City with the river of the water of life, as described in the last chapter of the last book of the bible, The Revelation of John. The doors have the text Blessed are they that do his commandments, that they may have right to the tree of life and may enter in through the gates of the city which is taken from Revelation chapter 22 verse 14. One side panel is incribed to the memory of Reginal Cull, a major benefactor of the church who sang in the choir for many years. He contributed over ₤250,000 towards the total of ₤600,000 spent improving and repairing the church over the last eleven years. A larger version can be downloaded by clicking on the picture.

All Saints' churchyard covers six acres and is a haven for wild life. Many varieties of wild flowers and species of birds can be seen as well as avenues of chestnut trees, originally planted to commemorate the return of Charles II in 1660. Some of the yew trees are at least 300 years old. Interesting gravestones include two mill stones just west of the tower, under which millers were buried. The two iron gates either side of Gascoyne Way are of late 18th century origin and were owned by Dr. Thomas Dinsdale the pioneer of smallpox innoculation. They were given to All Saints' in 1963 and make a fine feature in a churchyard that has been in use for at least a thousand years.

There is more information, and a number of photographs, in the short guide.